Manchester United are reportedly edging closer to emphatically bolstering their midfield ahead of the 2017/18 campaign by signing AS Monaco’s Fabinho and Chelsea’s Nemanja Matic.

Various reports from Italy, including Gianluca Di Marzio, have claimed that Fabinho will complete a move before pre-season for around €50m.

The Guardian has reported that Matic, in light of Tiemoue Bakayoko’s arrival to Stamford Bridge, will reunite with Jose Mourinho after the two clubs agreed on a £40m fee for the 28-year-old’s services.

Here is what Man United’s midfield could look like if the pair do complete a move to Old Trafford this summer. 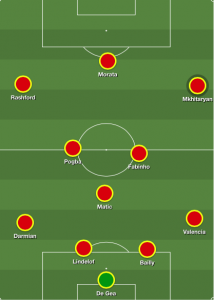 You may be bemused by the absence of Sir Matt Busby Player of the Year award winner Ander Herrera, but leaving him out from time to time will only aid his freshness and effectiveness as a midfield warrior when called upon – most notably for big games away from home that will probably see the less mobile Matic step aside and give the Spaniard license to tenaciously dominate proceedings.

Michael Carrick has, to the delight of supporters, signed a new one year deal but will be 36 this season and unable to feature on a regular basis. Deploying both Matic and Fabinho, and not just one of them, is therefore imperative, with the former acting as a no-nonsense midfield lynchpin whilst the Brazilian, who can also fill in at right back, plays the role of enforcer alongside Paul Pogba.