Jose Mourinho has already made the important signing of Victor Lindelof this summer but is by no means finished in the transfer market.

Both Alvaro Morata and Nemanja Matic are edging closer to completing moves to Old Trafford, whilst the likes of Ivan Perisic, James Rodriguez and Fabinho have emerged as targets as well.

Indeed, most of Man United’s interest has leaned towards bolstering their midfield and strike force, but full-backs Jordi Alba and Nelson Semedo have also been on Mourinho’s radar.

Here is a potential XI next season containing all the regularly named targets so far from this transfer window. 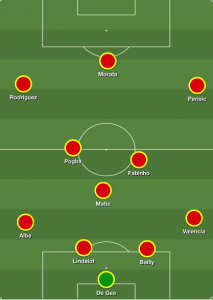 This is, of course, just a hypothetical starting XI and will not be what supporters see as their side walks out to face West Ham United in August, but it does provide a useful indication of the team – and ethos – Mourinho is trying to build at Old Trafford.

Having Fabinho and Matic, not to mention Ander Herrera as a regular feature, alongside Paul Pogba will give the Frenchman license to roam forward at will – something he couldn’t do on occasion last season.

The combination of the industrious Perisic on the right hand side side and the skilful Rodriguez on the left provides a tantalising blend of attacking craft and one that will, with Pogba joining in attack as well, supplement the deadly Alvaro Morata in front of goal.