Potential Manchester United XI for next season with Romelu Lukaku at No.9

The last month or so has been dominated by reports of Real Madrid’s Alvaro Morata edging ever closer to joining Manchester United, but that story has been ripped to shreds in a morning by after it was revealed that a £75m fee had been agreed for Everton’s Romelu Lukaku.

It was thought for some time that the 24-year-old was destined for a return to Stamford Bridge, but Jose Mourinho has shrewdly took advantage of Chelsea’s apparent inertia.

Meanwhile, poor Florentino Perez will not receive the €80m he was banking on, and supporters can look forward to welcoming the man with no fewer than 20 goals in any of his last three campaigns.

Here is how Mourinho’s men, as they currently are, could shape up with Lukaku for when they face LA Galaxy next week. 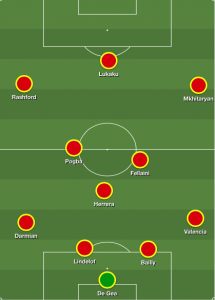 Most top sides shape up with a lone striker these days, but very few accommodate players that can be considered authentic, specialist No.9s used to leading the line on their own. Lukaku, however, is unquestionably one of them.

One of my initial concerns over Lukaku revolved around how he can occasionally slow play down – a grim kryptonite for Man United last year with Zlatan Ibrahimovic leading the line. But in some ways the Belgian offers more.

The 35-year-old was all about those individual moments of brilliance, usually personified in a quaint flick or pin-point pass out wide, almost reminiscent of a top chef putting the final touches on his signature dish.

Lukaku, on the other hand, has much more of a bull-in-a-china-shop feel to his game. He drags defenders everywhere, bustling forward in a state of controlled fury, and this, no doubt, will draw defenders towards him – they will have little choice – and leave space for the likes of Marcus Rashford and Henrikh Mkhitaryan to exploit.