The transfer window can throw up some incredibly sudden changes, and Manchester United’s sudden capture of Romelu Lukaku – despite being closely linked with Real Madrid striker Alvaro Morata for weeks – is an example of exactly that.

The Belgian, who claimed 25 Premier League goals last season, will now re-unite with Jose Mourinho for a fee of £75m, seemingly leaving the Morata deal dead in the water.

Mourinho has opted for somebody that can more or less guarantee goals in the Premier League, but it is hard to ignore what Morata could bring to United as well.

Indeed, as Sky Sports have shown, the only player with a better minutes to goal ratio than Morata in last year’s La Liga was Lionel Messi. 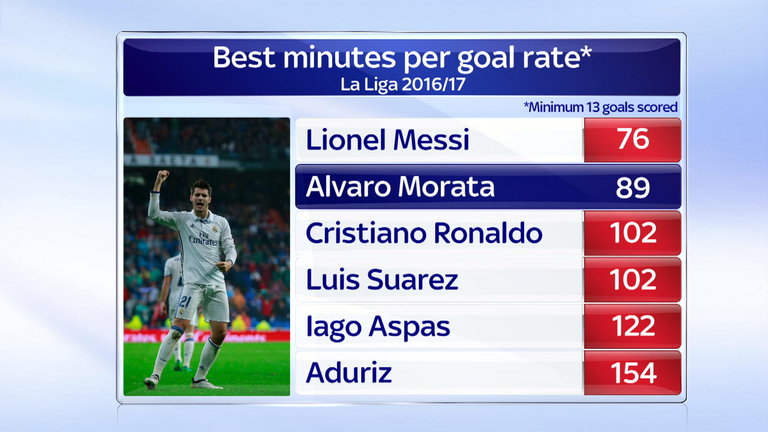 Don’t get me wrong, the prospect of signing Lukaku is exciting. The last in-form Premier League striker United signed guided them to a twentieth title, and nobody can blame Mourinho for moving in the same direction.

And yet, somehow, losing out on Morata – clearly hellbent on an Old Trafford move – would be simultaneously disappointing.

As things stand, United only have two strikers in the form of Anthony Martial and Marcus Rashford, with Zlatan Ibrahimovic and Wayne Rooney both set to leave the club. And we shouldn’t forget that Mourinho’s men scored fewer goals than AFC Bournemouth last season.

If the Portuguese is serious about challenging for the Premier League title, he will need to consider landing two established strikers this window, and that means maintaining interest in Morata.