Home » How Manchester United could line up next season with Romelu Lukaku at No.9

How Manchester United could line up next season with Romelu Lukaku at No.9

Jose Mourinho‘s biggest task over the summer was to eradicate the collective neurosis that saw his Manchester United side, time and time again, struggle to put lesser teams away at home.

Stoke City, Burnley, West Ham United, Hull City, AFC Bournemouth, West Bromwich Albion, Swansea City, and Arsenal – these are all teams that came to Old Trafford and should have been beaten soundly. But they weren’t.

The 54-year-old, in response, has signed somebody who has, over the last few years, mastered the art of demolishing sides of the above calibre: Romelu Lukaku.

But how exactly will Mourinho go about fitting the Belgian, set to cost £75m, into his line-up ahead of the 2017/18 campaign? 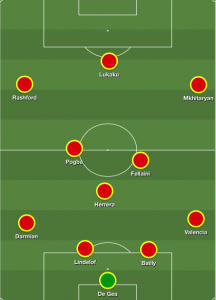 This is unlikely to be the exact side we see walk out against West Ham United next month; Mourinho will want to see his midfield evolve in a way that gives Paul Pogba a more direct route to Lukaku.

Either way, the 54-year-old’s decision to place the Belgian – and not Alvaro Morata or Antoine Griezmann – at the mouthpiece of his attack hints towards a more direct, brutish approach.

United’s build-up last season was at times too predictable, but with Lukaku bombastically charging forward in that idiosyncratic way of his, backed up by Pogba and the combined craft and raw energy of Marcus Rashford and Henrikh Mkhitaryan, the Portuguese is clearly building an attacking unit that focuses on a swift counter-attacking approach designed to optimise opportunities for the 24-year-old.

The message is clear for a side that needs a flat-track bully of sorts: give this man as many chances as possible.