Home » Manchester United vs La Galaxy: Potential XI with Andreas Pereira at No.10

Manchester United vs La Galaxy: Potential XI with Andreas Pereira at No.10

Manchester United will begin their heavy pre-season tour of the United States against LA Galaxy at the StubHub Center in California on Sunday.

Jose Mourinho‘s men will play a total of eight games in eight cites and four different countries – the United States, Norway, Ireland and Macedonia – over 24 day period as they prepare for the 2017/18 campaign.

The Portuguese has already confirmed that new signing Romelu Lukaku will not feature, but the encounter serves as a chance to see a number of youngsters impose themselves on the manager’s plans moving forward.

With that in mind, here is a potential XI featuring Andreas Pereira, now back from his loan spell at Granada, operating behind Marcus Rashford at No.10. 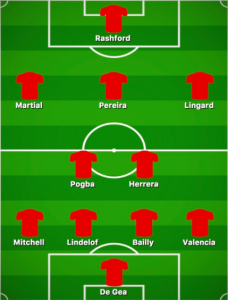 Pereira wasn’t at Old Trafford last season and indeed outside the realms of interest for many supporters, but eyes will be firmly fixed on the Brazilian on Sunday to see whether he can translate the lessons picked up in La Liga into something Mourinho would want to see more of next season.

He featured out wide and in central midfield with Granada, but his best performances came at No.10 – the perfect place to showcase his mesmerising control and ability to drive play forward.

The road to the first team is a long one, and this is the first – and most important – step.