Home » Photo: What Ivan Perisic will bring to Manchester United

Photo: What Ivan Perisic will bring to Manchester United

Jose Mourinho would have been concerned by the fact that Antonio Valencia, the right back, was Manchester United’s best wide player last season.

The likes of Marcus Rashford, Jesse Lingard, Anthony Martial, Henrikh Mkhitaryan and Juan Mata impressed, of course, but none offered that direct, brutish, get-to-the-bloody-byline influence commanded by the Ecuadorian.

The 54-year-old has turned to Inter Milan’s Ivan Perisic in response, with the club reportedly determined to complete the move by next Tuesday.

And the below stat, as displayed by Sky Sports, shows you exactly why Mourinho has refused to give up on the Croat. 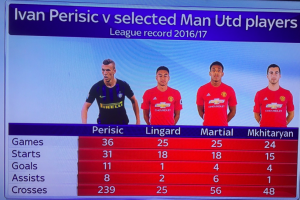 This is what United missed last season. Football in general is slowly witnessing the extinction of traditional wingers – the kind of player to stick religiously to the touchline and look to eat up grass as quickly as possible, sending in pin-point crosses for onrushing strikers. In their place has arrived a kind of winger capable of cutting inside and even acting as a second – or decoy – No.10.

But with Romelu Lukaku leading the line next season, Mourinho needs a serial crosser capable of providing width and accuracy going forward, and very few players are capable of fulfilling that role better than the 29-year-old.