Real Salt Lake and Manchester United will meet for the first time ever on Monday night as they meet in Utah for a pre-season friendly.

Jose Mourinho‘s men romped to a 5-2 win over LA Galaxy in their first pre-season game on Saturday night, taking advantage of a number of shabby errors at the back from the home side.

The Portuguese begun the game with his usual 4-3-3 system, with Juan Mata and Jesse Lingard out wide, before moving to a back three for the second half.

Here is how United could line up on Monday night as a back four, with Paul Pogba and Axel Tuanzebe coming into midfield. 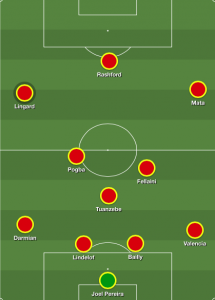 Mourinho cautiously toyed with a three at the back approach last season and even saw his side churn out some solid performances against the likes of Middlesbrough and Chelsea (at least before Ander Herrera was sent off) before ultimately reverting to a four towards the campaign’s climax.

But pre-season is the only viable time managers have to see various experiments put into practice, and Mourinho is clearly keen to further probe his squad’s capacity to operate with three at the back.

Seeing Pogba used in the second half came as something as a surprise: it was, after all, the likes of Herrera and Marouane Fellaini benefitting the most from an altered line-up.

The Frenchman has always looked at his very best with a back four and a designated defensive midfielder; this is indeed what supplements his furious capacity to turn defence into attack so quickly.