Home » Manchester United vs Barcelona: Potential XI with Henrikh Mkhitaryan at No.10

Manchester United vs Barcelona: Potential XI with Henrikh Mkhitaryan at No.10

Manchester United have won all four of their pre-season tour games in the United States and they will be determined to complete a clean sweep with a win over Barcelona in Washington on Thursday.

With less than three weeks to go until the Premier League season kicks off, Jose Mourinho will want to consolidate what has encouraged him during the tour so far.

When, for example, were Man United at their best? And what should Mourinho do to build on it?

With these questions in mind, here is a potential XI for the clash on Thursday featuring Henrikh Mkhitaryan at No.10. 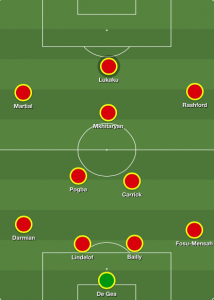 Man United were at their most dangerous during a ruthless first half against Manchester City in Houston that saw the Armenian bursting through the lines with the ball and combining with both Marcus Rashford and Romelu Lukaku to create a direct, powerful, devastatingly fast attacking dynamic – supplemented, of course, by the visionary brilliance of Paul Pogba further back.

Mourinho may feel inclined to add the rip-roaring skill of Anthony Martial, as shown emphatically against Real Madrid on Sunday with his deflowering of Dani Carvajal, to the left hand side to create an attacking quartet of craft, power and terrifying speed.