Manchester United will round off their pre-season tour of the United States with a clash with Ernesto Valverde’s Barcelona on Thursday in Washington.

The likes of Romelu Lukaku, Anthony Martial, Timothy Fosu-Mensah, Andreas Pereira and Scott McTominay have shown signs of having a potentially important impact next season, but one thing remains uncertain: the centre back partnership.

And so, in response, here is a potential XI for the clash with Barcelona featuring Victor Lindelof and Eric Bailly at centre back. 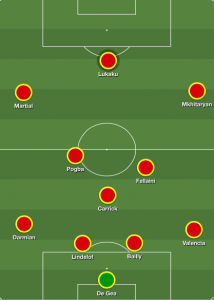 There’s no way of dressing this up: Lindelof’s challenge to give away a penalty against Madrid was one of the most poorly timed things I’ve ever witnessed in my life. His misery continued from the spot with a penalty that didn’t even require the keeper to move in order to stop it.

In other words, this was a day to forget for the Swede, and perhaps indicative of some consistency being needed following four games of chopping and changing.

The Portuguese is clearly looking to provide some variation and chances to all, but with less than three weeks until the new Premier League season kicking off Lindelof and Bailly – the expected first choice centre back partnership – have not played together.

Mourinho ought to consider giving the pair at least 60 minutes together during last three games before their clash with Madrid in Macedonia on August 8.