Home » Valerenga vs Manchester United: Potential XI with three at the back

Valerenga vs Manchester United: Potential XI with three at the back

Jose Mourinho noted following Manchester United’s 5-2 win over LA Galaxy earlier this month that he planned to use three at the back at various points next season.

The Portuguese, at the very least, wants to engender an adeptness at shifting to a back three with relative ease and execution when they need to next year.

However, aside from the second half against LA Galaxy, Mourinho hasn’t changed from a back four at all.

With that in mind, here is a potential XI for Man United’s clash with Norwegian side Valerenga featuring a back three and Paul Pogba moving into a more advanced role. 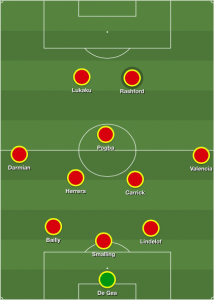 Mourinho’s biggest task for next season will be to get both of his marquee signings from the last two summers – Romelu Lukaku and Pogba – firing in perfect symbiosis.

Against Barcelona, the Frenchman was ebullient, brushing off challenges and bombing forward whenever he got the chance, but he once again looked limited playing in a two man pivot with Michael Carrick, which left Lukaku slightly isolated and, worryingly, dropping deeper to look for the ball.

Having Pogba sitting in front of Ander Herrera and Carrick, with Matteo Darmian and Antonio Valencia bringing width high up the pitch, will give the 24-year-old a clearer avenue towards goal. And with both Lukaku and Marcus Rashford putting pressure on the back four with their direct approach, this could be an ideal alternative for Mourinho when a change of tact is needed.