Manchester United’s pre-season tour of the United States has finished and they will now focus on the clash with Norwegian side Valerenga.

They are currently midway through the domestic Eliteserien season and lie in seventh spot with a game in hand, while Man United are still very much going through the gears.

Jose Mourinho has done well to divide minutes between all of his players so far, but Ander Herrera and Juan Mata will be desperate to play on Sunday following a spell on the sidelines.

With that in mind, here is a potential XI for Sunday’s clash with the Spanish pair restored to the side after Mourinho confirmed they would be ready to feature. 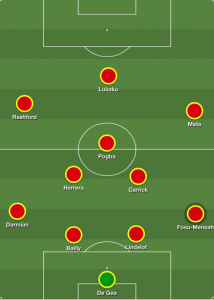 Mata picked up an ankle problem against Real Salt Lake City that has seen him miss three games, while Herrera only managed five minutes against Real Madrid before going off with a rib problem.

They would have been valuable assets against Barcelona, with United often failing to match their midfield tempo – something Herrera usually does without breaking a sweat – and notably struggling to keep the ball in tight areas, failing to mount much pressure as a result. And this, make no mistake, is what Mata brings to the table in abundance.

Most importantly, however, Mourinho will be determined to bring them back up to speed ahead of the Super Cup clash with Madrid on August 8.