A photo of Nemanja Matic wearing Manchester United’s training kit has been leaked after the Serb completed his medical at Carrington ahead of a £40m move to Old Trafford.

The 28-year-old has been on Man United’s radar for some time and, in spite of an initial backlash from Chelsea in light of Romelu Lukaku’s move, will become Jose Mourinho‘s third signing of the transfer window. 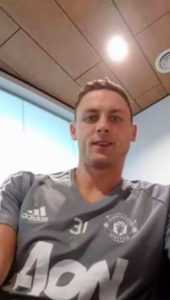 He completed his medical on Sunday morning, with the two clubs agreeing on a mutually agreeable fee the day before, and will be officially announced as a United player on Monday.

There has been some inevitable debate surrounding the legitimacy of this photo. Something about it does, I admit, look off colour: almost like his evil twin has stolen somebody’s phone and decided to cause some ruptures on the internet.

But common sense dictates that this is the real deal. He was seen at Carrington earlier today and the picture in question originally came from an iMessage group chat, so the likelihood is that the midfielder couldn’t resist snapping a few photos to show his friends after completing the medical.

Make no mistake: this is a huge – and necessary – signing ahead of the new season.