Manchester United will end their pre-season preparations against Sampdoria in Dublin on Wednesday ahead of their UEFA Super Cup clash with Real Madrid on August 8.

The Portuguese has used a variety of players in different positions, but with the Champions League winners looming and the Premier League kicking off in less than a fortnight, he will need to start thinking about his ideal line-up ahead of the new campaign.

With that in mind, here is Mourinho’s strongest line-up for the clash with the Italian side this week. 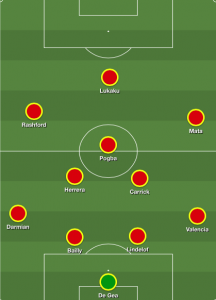 Juan Mata made a confident return from two weeks on the sidelines against Valerenga, producing a series of sublime touches and passes as Man United dominated proceedings, but will need more minutes to bring himself back up to speed.

Romelu Lukaku and Marcus Rashford have claimed six goals between them this season and Mourinho will have no reason to leave either of them out as preparations start to intensity. Their combined energy and strength could be simply devastating next year if deployed correctly.

And, of course, we have Paul Pogba: United’s star of the summer so far and indeed the proverbial heartbeat of Mourinho’s midfield. Having a full pre-season has clearly helped him and the addition of Nemanja Matic promises to only further unleash his potential.