Home » How could Manchester United line up with Nemanja Matic?

How could Manchester United line up with Nemanja Matic?

Manchester United have completed the signing of Nemanja Matic from Chelsea and Jose Mourinho has his much needed third signing of the transfer window.

Jose Mourinho can now, you sense, start to mould this season’s side in earnest with the Serbian, who arrived for £40m on Monday, now within his ranks.

He had before conceded that only signing one more player this summer would have been acceptable, pointing towards the brutality of the market, and there is no doubt that this elusive third player was Matic.

The question on everybody’s lips, of course, is how Man United will line up with the 29-year-old in the side. 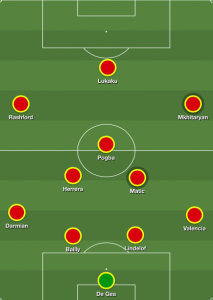 Competing for the Premier League title is indeed a team effort, from captain to reserve goalkeeper, but the nucleus of any assault on silverware lies in midfield.

And Mourinho can boast a genuinely exciting, wonderfully diverse core to his line-up: Ander Herrera‘s indefatigable tenacity and eye for snuffing out opponents mixed with Paul Pogba‘s authentic brilliance sets the tempo and onus to dominate opponents, but Matic is the final piece of the puzzle – the man sitting behind the pair, looming large with that almost basketball player-esque frame and simply ineffaceable, ensuring that nothing gets past whatsoever.

Plenty of progress has already been made over pre-season, but to the 54-year-old, now with his desired midfield, work begins in earnest.