Nemanja Matic made his first appearance in a red shirt during Manchester United’s 2-1 win over Sampdoria and looked instantly right at home.

Sitting behind Paul Pogba and Andreas Pereira, the Serb was the ideal blockade – almost like a languid, utterly in control shock absorber – during a half that saw Jose Mourinho‘s men dominate.

And we shouldn’t forget that Matic, heading into the game, hadn’t received any minutes over pre-season and participated in just one training session at Carrington.

With that in mind, Mourinho will want to give the Serbian more minutes going forward. Here is a potential XI for the UEFA Super Cup clash with Real Madrid featuring the 29-year-old at the base of midfield. 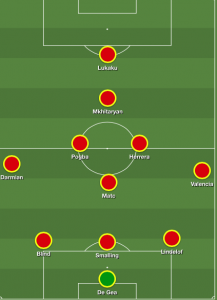 Whether Mourinho’s deployment of three at the back when first using Matic turns out to be a nod towards a new tactical direction remains to be seen, but nobody can doubt that this formation benefits the midfielder.

His regeneration at Chelsea last season, for instance, was largely ushered in by Antonio Conte’s decision to shift to a three at the back model, with Victor Moses and Marco Alonso as wing-backs simultaneously providing options out wide and ensuring they were up the pitch quicker, rather than being pushed back into their own half.

This is also the formation that shaped Paul Pogba‘s superb spell with Juventus, with either Andrea Pirlo or Claudio Marchisio filling in the ‘Matic role’. Mourinho will, you sense, want to probe this potential arrangement further.