Manchester United will have more than just a chance to pick up some silverware against Real Madrid in the UEFA Super Cup on August 8.

The clash with the Champions League winners in Skopje provides Jose Mourinho‘s men with an opportunity to lay down a marker ahead of making a return to the Europe’s elite next season.

And one crucial area will be how the Portuguese’s newly available midfield trio of Paul Pogba, Ander Herrera and Nemanja Matic fare up against the likes of Casemiro, Toni Kroos and Luka Modric.

With that in mind, here is a potential XI featuring the aforementioned trio for the clash in Macedonia next week. 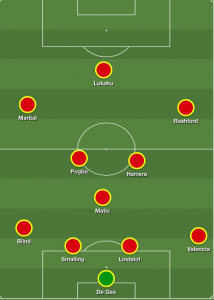 On paper, this looks like a genuinely promising midfield trio. Not just a collection of big names placed next to each other like we have often seen in the past, but indeed a coherent dynamic covering all the bases required for a formidable core: creative impetus and drive provided by Pogba; raw, unyielding tenacity from Herrera; and, of course, the newly acquired steel of Nemanja Matic, who looked right at home against Sampdoria in Dublin.

This is a chance for the three to set the tone for next season – to announce to the footballing world that they can swipe aside the very best as a lethal triumvirate.