Nemanja Matic made his first appearance in a Manchester United shirt against Sampdoria on Wednesday and, in spite of having virally no game time or time with the squad, looked immediately at home.

Shielding the back four, he was a subtle, utterly composed machine, shifting the ball around confidently and stopping anything that came his way.

And supporters will, no doubt, be keen to see their side’s newest addition make another appearance against Real Madrid in the UEFA Super Cup on Tuesday.

Here is how Jose Mourinho‘s men could line up in Macedonia with Matic starting at the base of midfield. 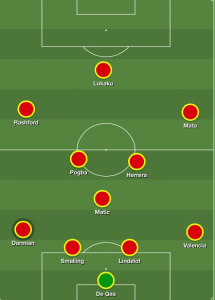 United took on Madrid in pre-season and the La Liga champions, in what was their first match since winning the Champions League in May, didn’t pose much of a threat, but make no mistake: they will be firing on all cylinders on Tuesday.

The likes of Cristiano Ronaldo, Gareth Bale and Karim Benzema are, of course, the most documented threats, but Madrid’s greatest attacking catalyst lies elsewhere in the form of the princely No.10 Luka Modric.

And this is where Matic comes in: the Croat can take the game away from any side with his breezy, elegant style, and the 29-year-old’s job will be to ensure that the gaps Modric seeks to exploit are firmly plugged for the entire evening.

It promises to be a spectacular battle of creative fluidity and staunch rebuffing, with the latter hopefully emerging triumphant.