Jose Mourinho, speaking after a win over Real Salt Lake City, pleaded with Ed Woodward to complete a third signing – alluding obviously to Nemanja Matic – and last Wednesday’s display revealed exactly why he wanted the 29-year-old as soon as possible.

He is much more than a sturdy midfield powerhouse capable of freeing up Paul Pogba; this is somebody who will help this Manchester United side tick.

The very fact that, while Mourinho’s men dominated the first half against Sampdoria, Matic was hardly detectable – calmly shifting play along and routinely putting out opposition attacks – tells a story in itself.

His stalwart influence will be desperately needed against the wizardry of Luka Modric and Toni Kroos in Macedonia on Tuesday. And here is how Man United could line up with the Serbian and Paul Pogba in a midfield pivot. 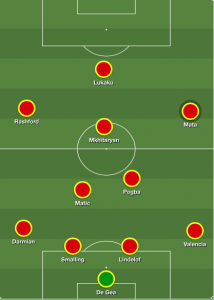 Jose Mourinho was keen to emphasise the necessary simplicity with which Matic went about his game in Dublin. He was not the star of the show by any stretch, but his presence ensured that no Sampdoria player could grab the limelight either.

Needless to say, this will be his role against Madrid. A good game, so to speak, is completely against Mourinho’s interests, since it entails players like Modric, Gareth Bale and Karim Benzema enjoying time on the ball and ultimately dominating proceedings.

The Portuguese will want Matic, with Pogba driving forward to alleviate pressure, to nullify proceedings in the sweltering Macedonia heat, forcing Madrid to work harder and turning the game into a ponderous ordeal.

This form of victory via slowly stifling the midfield battle may be anathema to one’s purist instincts, but as Mourinho notes: the poets don’t win anything.