That glorious, balmy evening in Stockholm back in May feels like eons ago, but Manchester United are finally back in action on Tuesday as they take on Real Madrid in the UEFA Super Cup in Macedonia on Tuesday.

Jose Mourinho can be pleased with how pre-season has smoothly unfolded, unlike last year, with his side – based in superb facilities in Los Angeles – claiming wins over LA Galaxy, Real Salt Lake, Manchester City, Madrid, Valerenga and Sampdoria, suffering only one defeat to Barcelona.

The Portuguese has had plenty of time to assess his options but now the time for pontificating is over: he needs to pick his best side as Man United seek to claim their first ever Super Cup against the Champions League holders.

Here is Mourinho’s strongest line-up, based off what we have seen over the last few weeks, for the clash with Zinedine Zidane’s men in Skopje. 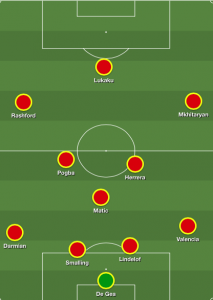 Anthony Martial has enjoyed an impressive pre-season, with the highlight being a superb run against Madrid alongside a bombastic cameo against Sampdoria, but you sense that Marcus Rashford‘s direct, powerful influence on the left hand side against Dani Carvajal, coupled with Henrikh Mkhitaryan’s craft to draw Marcelo into uncomfortable positions – making way for Antonio Valencia to exploit gaps – could be United’s best chance of unlocking the La Liga champions.

An area promising more concern than optimism, however, will be the partnership of Chris Smalling and Victor Lindelof. The pair looked all at sea against Barcelona when put together and haven’t shown many signs of assurance over the last month, but Mourinho has his hands tied with Eric Bailly and Phil Jones both suspended for the game.