Manchester United were handed a footballing lesson by Real Madrid for a good 60 minutes but they learned a few lessons in the process.

The first being, of course, that the chasm between English sides and Europe’s elite is widening to an insurmountable degree.

That said, Romelu Lukaku’s debut goal, which came soon after he wasted a brilliant chance, alongside the bustling impact brought by Marcus Rashford on the left hand side, was an important nod towards strengths in the side that Jose Mourinho will want to utilise against West Ham United on Sunday.

With that in mind, here is a potential XI for the game with the pair, alongside Juan Mata, forming Man United’s attacking triumvirate. 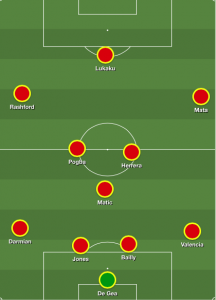 I am still playing that Lukaku miss over and over again in my head. I’m sure you are too. Seeing him pounce on a rebound a few minutes later only accentuated the pain. United could have been level.

But with West Ham in mind that isn’t necessarily the point. Indeed, the way in which Lukaku, through virtue of being in the right place at the right time, was presented with two golden chances against the European champions should be considered as grounds for immense optimism. United lacked a poacher last season and there aren’t many better out there than the 24-year-old.

And Rashford, who replaced an ineffective Jesse Lingard at half time, had a similar impact. The youngster stretched Dani Carvajal and carved out a brilliant chance to equalise, only to see his scuffed shot parried away by Navas.

The bottom line, however, is that the pair caused Madrid problems and should have been more clinical. Supporters will be interested to see how they fare against Slaven Bilic’s men on Sunday.