Home » Manchester United vs West Ham: Potential XI with three at the back

Manchester United vs West Ham: Potential XI with three at the back

Manchester United will begin their Premier League campaign against West Ham United on Sunday and they need to make a statement straight from the first whistle.

This time around, however, pre-season preparations have unfolded with minimal fuss and Mourinho has a squad at his disposal that, bit by bit, is starting to resemble the glorious sides he managed in the past.

Here is how Man United could line up against Slaven Bilic’s men on Sunday using a three at the back system. 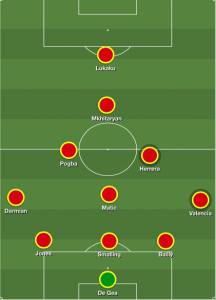 The defeat to Real Madrid in the UEFA Super Cup was, alongside other things, a dramatic example of three at the back failing to contain the opponent’s shape but rather rendering United’s own shape more vulnerable to Madrid’s onslaughts.

The wing backs – Jesse Lingard and Antonio Valencia – simply couldn’t make any headway going forward and were, in turn, caught in a kind of no man’s land that created space for Isco and Gareth Bale to exploit.

Thankfully, West Ham aren’t Madrid, and Mourinho’s men will be expected to press high up the pitch in similar fashion to what we saw during the first half against Sampdoria in pre-season. This system gives Nemanja Matic optimum space in which to operate, as seen with Chelsea last season, allowing the Serbian to interact with Paul Pogba and Henrikh Mkhitaryan further forward.