Manchester United sent the perfect message to their rivals on the first weekend of the Premier League season with an emphatic 4-0 win over West Ham United.

The home side provided a spectacle contrasting heavily with the labouring performances seen last season, tearing across the pitch with vigour and purpose as Romelu Lukaku claimed a brace in 55 minutes to kill the game off.

One man watching from the sidelines was Anthony Martial, but his ten minute cameo, which saw him claim Man United’s third and set up Paul Pogba for the fourth, served as a potent message to Jose Mourinho ahead of Saturday’s clash with Swansea City at the Liberty Stadium.

With that in mind, here is a potential XI for the game against Paul Clement’s men with Martial starting out wide. 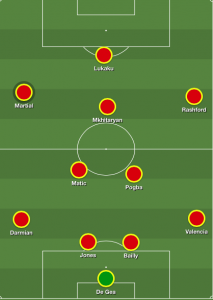 Juan Mata does not deserve to drop out of the starting XI after producing a typically crafty performance on the right hand side, but Mourinho can not ignore the crucible at the heart of United’s approach on Sunday: raw speed.

Old Trafford purred as Mourinho’s men tore across the surface in ways they haven’t before, and having Martial and Marcus Rashford on either flank would, you sense, cause havoc in Wales on Saturday. United were too ponderous at time last year and nothing would send shockwaves of fear across the division more than another rampant attacking display.