Manchester United made the perfect start to their Premier League campaign with a 4-0 win over West Ham but the scoreline, in many ways, was of secondary concern.

Jose Mourinho‘s men entertained a purring Old Trafford crowd – something they so often failed to do last year – with a fine exhibition of quick, efficient attacking football as the indomitable midfield duo of Paul Pogba and Nemanja Matic laid the platform for Marcus Rashford, Henrikh Mkhitaryan, Juan Mata and Romelu Lukaku to run riot.

They will now prepare for a different kind of task against Paul Clement’s Swansea City at the Liberty Stadium on Saturday – a clash that may demand greater presence in midfield with Leon Britton, Tommy Carroll and Leroy Fer likely to make up a midfield three in contrast with the midfield pivot comprising of Mark Noble and Pedro Obiang fielded by Slaven Bilic on Sunday.

With that in mind, here is a potential XI for the game against Swansea with Marouane Fellaini joining Paul Pogba and Nemanja Matic in midfield. 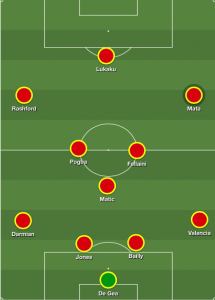 United will go up against a far better Swansea side than the one they dismantled 3-1 back in November last year, but they should take heed from how they went about putting together such a dominant performance. The midfield three Mourinho picked back then included Fellaini, Pogba and Michael Carrick and they controlled the game through virtue of sheer muscle.

Having the Belgian alongside Pogba and Matic would create a stark physical contrast with the diminutive Britton and Carroll. Quickly paced away games such as these are often shaped by who wins the tug of war in the middle and Mourinho can boast a truly imposing midfield triumvirate in Wales.