Romelu Lukaku, Nemanja Matic and Phil Jones have been handed places in the BBC Team of the Week following Manchester United’s 4-0 demolition of West Ham United on Sunday.

All eyes were on Lukaku, making his Premier League debut in a red shirt, and he didn’t disappoint, lashing Man United into the lead following Marcus Rashford‘s through ball just after half and hour before killing the game off with a trademark header after 55 minutes.

But it was the other debutant, Matic, who really stole the show with a graceful, completely dominant performance in midfield alongside Paul Pogba while Jones, following a strong pre-season, nullified the threat of Javier Hernandez all afternoon.

And the trio were rightly handed a place in the BBC Team of the Week alongside former captain Wayne Rooney, who scored on his Everton debut. 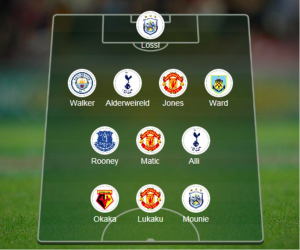 Plenty has been said about Lukaku and Matic over the last few days. The pair have notably shifted the dynamic at Old Trafford closer to Mourinho’s final vision. United look stronger and more purposeful with the two added to the ranks. Following excellent Premier League campaigns last term they will, you sense, kick on and deliver more of the same.

But Jones deserves a special mention. The platform from which United produced the best performance of the weekend couldn’t have emerged if it wasn’t for Jones’ gritty efficiency at the back alongside Eric Bailly. His power and assurance felt magnified in its importance following a weekend that saw Chelsea, Liverpool and Arsenal all ship three goals.

Supporters will be desperate to see Jones remain fit over the next few months with Marcos Rojo still convalescing and Victor Lindelof taking time to settle in.