Romelu Lukaku had just claimed two goals on his first Premier League outing with Manchester United against West Ham United, sending an emphatic message to future opponents for this season, but he was quick to highlight the special connection developed with Marcus Rashford as a reason behind his immediate success at Old Trafford.

The teenager was instrumental in setting up Lukaku’s first goal at Old Trafford, bombing down the middle of the pitch before releasing the Belgian to sweep home Man United’s opener.

“Me and Marcus, we really clicked from the first day when I arrived,” he said. “I get along with everybody in the dressing room, but with Marcus, it’s something special.”

With that in mind, here is a potential XI for the clash with Swansea City this weekend featuring the pair leading the line in a three at the back set-up 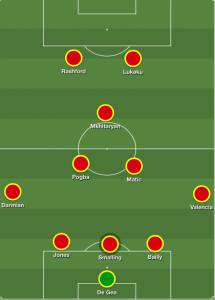 We shouldn’t be surprised at the sight of Lukaku and Rashford working together in perfect destructive tandem going forward. When it comes to attacking the two espouse a similar mantra: to be ruthless, unyielding and always direct in their attacking movements, forcing defenders to move out of position through sheer virtue of power and pace on the ball.

Their styles are simple yet devastatingly effective and, most notably, exactly what United supporters will want to see all season. They put on an exhibition against West Ham, bursting past defenders at will, and they deserve a chance to display what they can do when deployed as a front two against Federico Fernandez and Alfie Mawson on Saturday.