On the eve of Manchester United’s Premier League opener against West Ham, it felt as if the success of their season would be largely determined by how well the midfield trio of Paul Pogba, Nemanja Matic and Ander Herrera worked as a triumvirate at the heart of proceedings.

As it turned out, Mourinho didn’t even need Herrera on Sunday. The joint firepower and skill of Pogba and Matic blew West Ham away.

This gives Mourinho a luxury he didn’t know he had: a license to rest the Spaniard – to keep him as fresh as possible ahead of big games or clashes where opposition managers will look to pack the midfield.

Paul Clement will most likely employ a midfield trio comprising of Leon Britton, Tommy Carroll and Leroy Fer for Swansea on Saturday, meaning Herrera’s inclusion could be vital for keeping the game firmly in Man united’s control. With that in mind, here is a potential XI for the lunchtime clash in Wales. 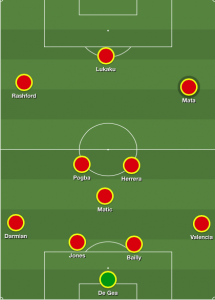 The loss of Gylfi Siggurdson’s craft will, you sense, force Clement into counteracting United’s looming physical threat with optimum energy. A frantic midfield that doesn’t let either side take full control. Those are the conditions Swansea will look to create.

And this is where Herrera comes in. The Spaniard made a habit out of eclipsing his opposite number’s energy last season, turning the game in United’s favour as a result, and his presence on Saturday will be geared towards doing exactly that.