Home » Manchester United vs Swansea City: Potential XI with Henrikh Mkhitaryan at No.10

Manchester United vs Swansea City: Potential XI with Henrikh Mkhitaryan at No.10

With Romelu Lukaku scoring goals for fun, Paul Pogba and Nemanja Matic dominating in midfield and Anthony Martial showing signs of his old self, the brilliance of Henrikh Mkhitaryan has been largely ignored during the early stages of the season.

The Armenian only managed one assist in the Premier League last season. This time around, however, he already has four after just two games.

He has been a seminal influence in the middle, carefully manipulating the ball in tight spaces and releasing teammates to inflict damage at will.

And with Leicester City – ripped to shreds by Mkhitaryan back in February when the two sides last met – lingering on the horizon, Mourinho ought to give him another chance to impress from the centre. 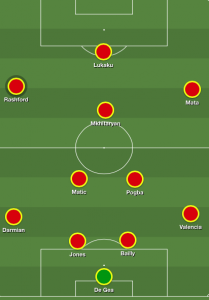 Mkhitaryan never really received a prolonged chance to impress at No.10 last season, with Mourinho largely opting for a 4-3-3 set-up, but Matic’s presence has changed that. The Serbian’s clever positioning opens up gaps further forward and creates avenues through which to find the 28-year-old, who can then turn and inflict damage alongside the equally lucid Juan Mata on the right hand side.

He can have periods of relative anonymity, sure, but when he springs to life there is very little anybody can do to stop him.