The Ecuadorian provided another solid, disciplined captain’s performance on the right side, whilst Bailly complimented his first senior career goal with a robust defensive display.

At the other end, Mkhitaryan and Pogba ran riot, with the former claiming two assists inside two minutes and the latter dominating proceedings in the middle, claiming a goal and an assist of his own.

And the four were duly awarded with a place in Crooks’ ‘Team of the Week’ as Jose Mourinho‘s men continue to dominate the headlines. 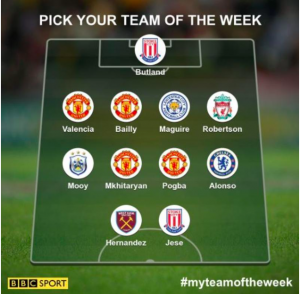 The fact that a number of other United players – Romelu Lukaku, Phil Jones and Nemanja Matic especially – could have easily made this side points towards a group of players working together in perfect harmony.

Jose Mourinho had to rely on Zlatan Ibrahimovic last year for decisive contributions going forward and has understandably called on other players to step up.

He has received an emphatic response. Every player, you sense, wants to take responsibility in attack, and it has led to United looking like a crucially multidimensional threat during the early stages of the campaign.