If you were to pin-point the main thing different about the Manchester United of this season compared to the outfit we saw last year, it would undoubtedly revolve around speed.

Jose Mourinho‘s men were criticised for being too predictable in their attacking build-up last year, often failing to stretch lesser teams at home, and they slumped to sixth spot as a result.

This time around, however, Man United have placed raw pace and power at the forefront of their approach, with the likes of Romelu Lukaku, Marcus Rashford, Henrikh Mkhitaryan and Anthony Martial wreaking havoc going forward in 4-0 wins over West Ham United and Swansea City.

And with that in mind, here is a potential XI featuring Rashford and Martial out wide for the clash with Leicester City on Saturday. 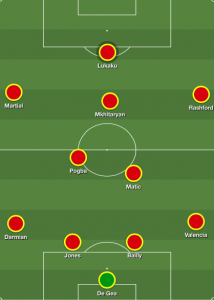 Mourinho, speaking after the demolition at the Liberty Stadium, made a point of “letting the horses run freely”, and that will be music to the ears of United supporters.

The ability to express oneself is a fundamental pillar of any forward’s game, and the aforementioned pair have notably benefitted during the early stages of this season. Mourinho’s instructions to them on Saturday should be simple: pick your head up and take players on.