In their first two Premier League outings of the season, Manchester United have shown themselves to be effective proponents of the ‘death by a thousand cuts’ method.

Not the practice banned in China in 1905, no, but rather the capacity to hold the ball, move play along quickly and then, with around 15 minutes left, go in for the kill.

And no two players have been more fundamental to this process than Juan Mata and Henrikh Mkhitaryan, with the pair cleverly manipulating the ball against West Ham United and Swansea City until gaps opened up for the likes of Paul Pogba, Romelu Lukaku and Anthony Martial to exploit.

With that in mind, here is a potential XI for the game against Leicester City on Saturday with the aforementioned pair in attacking midfield. 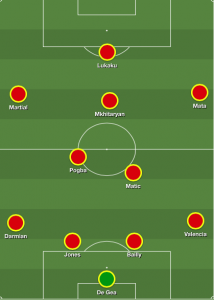 There can be times when it seems as if Mata and Mkhitaryan, compared to the penetrative Marcus Rashford, aren’t having an impact on the game.

But they are. Bit by bit, their inch-perfect short passes and subtle turns wear down opponents, especially during this August period, and supporters have seen its impact in action over the last couple of weeks.

Mourinho ought to deploy the same approach against a Leicester side that – having conceded most of the possession in the second half – notably crumbled in the last ten minutes against Arsenal on the opening weekend of the season.