Manchester United demonstrated on Saturday a capacity to break down a well organised side at home – something they painfully struggled with – in the form of a 2-0 win over Leicester City.

But they will face a different kind of test following the international break against a Stoke City side that has, with Xherdan Shaqiri and Jese Rodriguez out side, plenty of pace going forward.

Jose Mourinho‘s men, in response, will need to show some discipline of their own whilst also maintaining the same level of intensity moving forward.

And with that in mind, here is a potential XI featuring Jesse Lingard taking Juan Mata‘s place and Marcus Rashford coming back into the side. 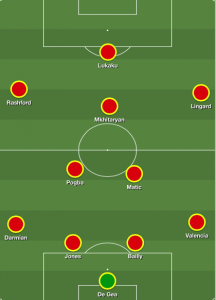 This will be a physical, furiously paced encounter, and in response Mourinho will need to use wingers capable of tracking back with fervour whilst also stretching Erik Pieters and Geoff Cameron at the other end.

Using Lingard and Rashford, therefore, makes sense. The former displayed against Leicester his aptitude for making runs in behind in the lead-up to Marouane Fellaini‘s goal, and that kind of verve will come in handy against Mark Hughes men, especially with Marcus Rashford inflicting damage on the other side.

Last season’s visit to the Bet365 Stadium saw United struggle to create space out wide and Mourinho, by placing emphasis on matching Stoke’s intensity, will want to ensure that history doesn’t repeat itself.