Many assumed that Nemanja Matic‘s arrival earlier this month would lay the platform for an indomitable midfield comprising of the Serbian, Paul Pogba and Ander Herrera.

But it turns out that, in some games, the latter’s tenacious influence isn’t even required for Manchester United to dominate games, such has been the brilliance of Matic and Pogba.

That said, there will be games where the Spaniard’s influence is vital, and Man United’s upcoming visit to Stoke City is one of them.

Here is how Jose Mourinho‘s men could line up at the Bet365 Stadium with Herrera making his first appearance of the Premier League season. 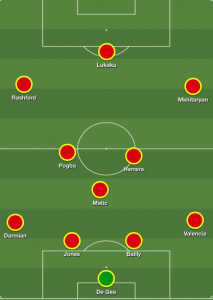 The fact that Herrera is no longer a necessary aspect of every line-up points towards further depth and quality in this United side. He can now be used as a specialist influence in the middle for games that require greater control in the centre.

Mark Hughes has used three at the back so far this season, with Jese Rodriguez and Xherdan Shaqiri operating as inverted wingers making diagonal runs as their wing backs create space out wide.

This is where Herrera comes in. Matic provides stability and a sense of structure at the back but Mourinho will need somebody to track the aforementioned duo – and nobody does that better than the Spaniard.