Jose Mourinho will demand a greater level of presence in midfield ahead of Manchester United’s clash with Stoke City on September 9.

The Portuguese has been able to sit back and watch Paul Pogba and Nemanja Matic dominating the first three Premier League games of the season with relative ease, combining power and craft to brush aside West Ham United, Swansea City and Leicester.

But he will need something different for the visit to Mark Hughes’ Stoke City – somebody capable of making life awkward for the likes of Joe Allen and former red Darren Fletcher.

And with that in mind, here is a potential XI including Marouane Fellaini – who claimed his first goal of the season against Leicester – coming into midfield. 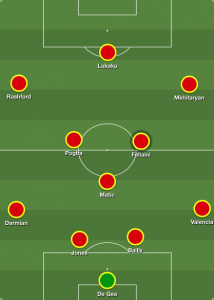 Stoke will look to make awkward for United. They will, like teams before them, attempt to squeeze Paul Pogba and stop the supply route to Henrikh Mkhitaryan and Marcus Rashford, forcing Mourinho’s men further back than they would like.

This is where the Belgian comes in: his boisterous, physically imposing presence serves as the perfect vacuum by which to pull midfielders out of position and, in turn, allow Pogba and Matic more room on the ball.

And while Stoke have considerably evolved since the days of Tony Pulis and Rory Delap’s long thrown-ins, having an aerial presence like Fellaini away from home is always useful.