Jose Mourinho has a favourable dilemma on his hands when it comes to deciding between who out of Marcus Rashford and Anthony Martial features on the left hand side.

The latter has been in irresistible form, providing a stark contrast from last year by claiming two goals, an assist and winning a penalty during the early stages of the season.

And Rashford, in response to being benched for Martial against Leicester, has made an emphatic statement to Mourinho by scoring against the Foxes and producing a powerful second half performance for England in their 4-0 win over Malta.

Neither player deserves a place on the bench. And Mourinho, in turn, should start them both against Stoke City next weekend. 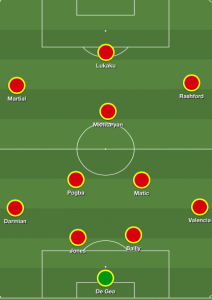 Juan Mata will have to be sacrificed, and that in itself is unfair because the Spaniard has done very little wrong in the first three games. But Stoke away is not the type of game he usually dominates. Mourinho will want to surround the creative genius of Henrikh Mkhitaryan with two bustling, effervescent influences out wide, pinning Stoke back and opening up gaps for the Armenian to exploit.

They have both shown themselves to be reliable in front of goal so far this season and supporters will hope to see them operating in vicious tandem next Saturday.