Much has been said about the improved speed of Jose Mourinho‘s Manchester United this season, but that hardly tells the full story.

The presence of Romelu Lukaku, combined with the scintillating form of Marcus Rashford and Anthony Martial, has combined to give Man United a sense of verve on the break they didn’t have last season.

But none of that would be possible if it wasn’t for the binding effect offered by the crafty duo of Juan Mata and Henrikh Mkhitaryan, who have worked in sumptuous tandem to slowly but surely open opponents up.

And with that in mind, here is how United could line up against Stoke on Saturday with the pair featuring in attacking midfield once again. 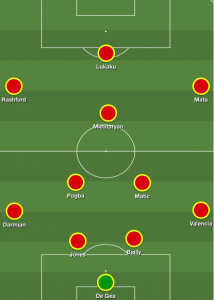 The threat posed by Mata and Mkhitaryan is subtle yet vital. Featuring on the right and at No.10 respectively, they grind opponents down slowly, pulling them across the pitch until, eventually, a lapse of concentration emerges and they go in for the kill.

Mkhitaryan, for instance, has claimed five assists so far this season and four of those have come in the last 20 minutes. There aren’t many attacking midfield duos more adept at executing the ‘death by a thousand cuts’ method and such an influence will be vital against Stoke on Saturday.