The international break is usually a period feared by supporters, but the feel good factor at Manchester United has only continued over the past week.

Romelu Lukaku, after drawing a blank against Leicester City, has responded in emphatic fashion for Belgium with a hat-trick against Gibraltar and a winning goal against Greece to send his country to the World Cup.

And Marcus Rashford has been equally irresistible, changing the game against Malta before single-handedly guiding England to a crucial 2-1 win over Slovakia at Wembley, claiming a goal and an assist.

Jose Mourinho, in turn, could choose to partner the two up front for Man United’s trip to Stoke City on Saturday afternoon. 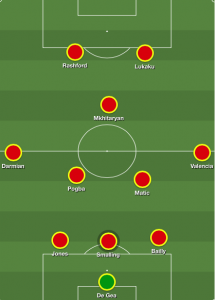 Lukaku scoring goals is hardly big news. The 24-year-old’s crowning quality is being in the right place at the right time, always on hand to add to his tally. He is a goal machine in the fullest possible sense. He just sniffs out chances.

Placing him alongside Rashford, who has added goalscoring prowess to his ruthless style in recent times, could lead to something special. The teenager could have been more prolific last season and the early signs suggest he is continuing to develop both in confidence and precision – something Mourinho will want to foster as much as possible.