Manchester United kick off their Champions League adventure against Swiss champions FC Basel on Tuesday night and Jose Mourinho, more than anything, will want to see his back four hold firm after a disappointing defensive against Stoke on Saturday.

Individual mistakes from Eric Bailly and Phil Jones, along with a general air of shakiness, handed Stoke two goals as Mourinho’s men had to settle for a 2-2 draw.

The pair are both banned for the clash with Basel, paving the way for Victor Lindelof and Chris Smalling to make their first starts since the UEFA Super Cup defeat to Real Madrid in August.

With that in mind, here is a potential XI with the aforementioned duo at the back. 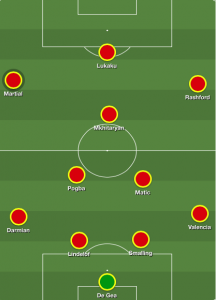 Mourinho would have been deeply concerned to see his first choice back four struggle to cope with Stoke’s direct attacking approach. Make no mistake: Man United’s chances of challenging for the title hinge solely on producing far more organised, composed displays than what we witnessed at the Bet365 Stadium.

Tuesday’s clash, therefore, presents Lindelof and Smalling – both yet to assert themselves on Mourinho’s line-up so far this season – with an important chance to show themselves to be a viable alternative capable of holding a solid line this season.