Manchester United are back where they belong in the Champions League and supporters will want to see their side make a statement against FC Basel.

That miserable night in Wolfsburg feels like a long time ago, with Man United now bringing a sense of purpose and power to their play under Jose Mourinho, who has won this competition twice before.

And they will need to approach this competition in the same way, mixing raw speed going forward with composure on the ball.

With that in mind, here is a potential XI for the group stage opener against the Swiss champions with Marcus Rashford and Henrikh Mkhitaryan. 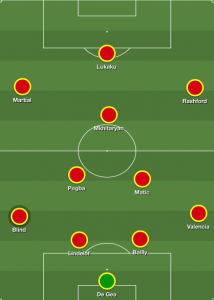 Rashford didn’t know much about it, but he added his second goal in as many games against Stoke City over the weekend, along with a crucial winning goal for England during the international break. The youngster has complimented his habitual ferociousness on the ball with a veneer of cold precision so far this season, and Mourinho will want to call on his potency on a night where United need to sparkle.

The Armenian’s inclusion is something of a no-brainer: he was United’s star man in Europe last season, popping up with vital goals in the knockout stages, and has six assists to his name already this term. Mourinho will want to get the ball to his feet as much as possible.