Any concerns over Paul Pogba were quickly sidelined by what was a scintillating Marouane Fellaini performance against FC Basel on Tuesday night.

The Frenchman limped off after just 16 minutes with a hamstring injury and Jose Mourinho confirmed soon after the game that he would miss the clash with Everton on Sunday.

A significant blow, yes, but one that gave Fellaini the chance to assert himself in emphatic fashion, crowing a superb midfield display with a goal and an assist.

And with that in mind, here is how Mourinho could line up on Sunday with the Belgian receiving his first start of the season. 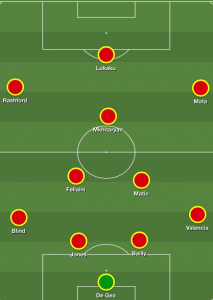 Zinedine Zidane, tucked under a Fellaini duvet and with the Belgian adorning posters all over his wall, would have been watching on with awe at home last night.

This was a performance that almost felt dystopian. The United fanbase has spent so long lambasting the midfielder, labelling him as nowhere near good enough, that the sight of him dominating Champions League games feels slightly surreal.

But we have to take him seriously. Mourinho certainly does. The boisterous, physical, languid dynamic he offers going forward cannot be found everywhere else and he deserves a chance to torment his former employers on Sunday.