The superb start to the season from Eric Bailly and Phil Jones was quickly forgotten during Manchester United’s 2-2 draw with Stoke City last weekend.

Victor Lindelof and Chris Smalling took their place during the week, claiming a clean sheet against FC Basel, and eyes will be firmly on whether Mourinho’s first choice pair can hold firm against a Ronald Koeman side including former captain Wayne Rooney.

With that in mind, here is how Man United could line-up against Everton with Bailly and Jones resuming their place in the starting XI. 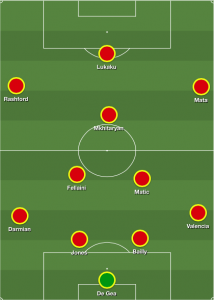 The first six games of the season have shown in emphatic terms that United are firing on all cylinders on an attacking front: Romelu Lukaku is scoring for fun; Henrikh Mkhitaryan looks ebullient at No.10; the pairing of Marcus Rashford and Anthony Martial is salivating; Maroaune Fellaini is tormenting all before him.

Questions continue to loom over United on a defensive front, however, with the last two games revealing a worrying propensity for making unnecessary mistakes at the back that invite pressure. Better sides than Stoke and Basel would have punished United.

This is a genuine concern. No side can challenge for a Premier League title if their first choice defensive partnership are giving away goals. And Bailly and Jones, quite simply, need to show on Sunday their capacity to remain watertight when placed under pressure.