Ashley Young has been handed a place in WhoScored’s Champions League ‘Team of the Week’ following his scintillating performance against FC Basel on Tuesday night.

The 32-year-old was surprise inclusion against the Swiss champions having been out of action ever since undergoing groin surgery four months ago.

And he produced a sublime performance going forward, supplying a superb assist for Marouane Fellaini after 36 minutes, whilst also displaying plenty of discipline and energy to keep Basel’s left hand side largely quiet.

Young was duly handed a place at right back alongside John Stones, Sergio Ramos and Rafinha in WhoScored’s ‘Team of the Week’ following match-day one. 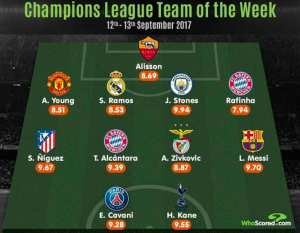 There is a case for arguing that Young offers more going forward than Antonio Valencia in this Mourinho system.

Make no mistake: the Ecuadorian is brilliant when he gets on the move, driving forward with inexorable fervour and beating opponents, but there is a lack of precision and craft to his approach that can, more often than not, hamper his final product.

This is not the case with Young. That assist for Fellaini, for example, reflected a mesmerising amount of control and precision to the veteran’s approach. Young is both a worker and a technician – something that will, no doubt, nicely compliment Valencia’s bull-in-a-china-shop style this season.