Manchester United have been a rampant force going forward so far this season but Jose Mourinho will be the first to tell you that more can still be done.

But the space United have created, along with the impetus to get in behind teams, has been once again underpinned by the presence of one unsung hero: Antonio Valencia.

And with that in mind, here is how United could line up against Everton on Sunday with Valencia and Ashley Young, who made a storming return to action against FC Basel, starting as full-backs. 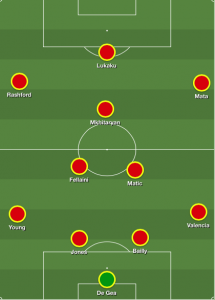 The influence of Valencia on United’s efficiency going forward cannot be underestimated. His driving power from deep occupies midfielders and defenders whilst giving players further forward space to inflict damage. Without him, Mourinho’s men would lack the dynamism so crucial to opening up teams sitting back.

And the Portuguese will want to replicate the same cut-throat presence on the other side with Young, who enjoyed a powerful, crafty display in midweek. Having the pair militantly bombing up and down the flanks against an Everton side lacking confidence could give Henrikh Mkhitaryan the perfect platform from which to turn the screw on Ronald Koeman’s men.