Antonio Valencia has received a place in Garth Crooks’ BBC ‘Team of the Week’ following his sensational performance during Manchester United’s 4-0 win over Everton on Sunday.

The Ecuadorian lit up Old Trafford after just four minutes with a missile of a shot that rocketed past Jordan Pickford to give the hosts an early lead – his first goal at home since 2014.

And he continued to dominate proceedings down the right hand side, linking up nicely with Juan Mata and, in turn, stopping Leighton Baines from crossing the half-way line.

Valencia was duly given another place in Crooks’ ‘Team of the Week’ after captaining Man United to another emphatic home win. 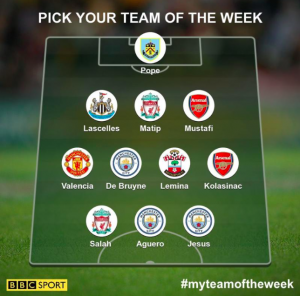 Is Valencia the most underrated player in the Premier League? For 18 months, the Ecuadorian has been a consistently solid and threatening force on the right hand side, bulling wingers and full-backs alike with reckless abandon.

The sheer regularity of his brilliance often precludes us from stopping and taking note of just how valuable he really is to this side. While others rise and flounder, the 32-year-old is there every week – no fussing about, head down – ready to do a job for his side and we as supporters perhaps ought to recognise the rarity of that.