The mood around Manchester United is undeniably positive following an emphatic start to the 2017/18 campaign, but one nagging concern continues to lie under the surface: the left hand side of defence.

Matteo Darmian was left exposed during the 2-2 draw with Stoke City earlier this month and Everton, as Gary Neville pointed out whilst commentating, enjoyed plenty of space in behind Ashley Young last weekend.

Needless to say, there isn’t a better time for Luke Shaw, now back from an ankle injury, to assert himself on Jose Mourinho‘s starting XI.

And with that in mind, here is a potential XI for Wednesday’s League Cup clash with Burton Albion as Shaw makes his first appearance in a red shirt since April. 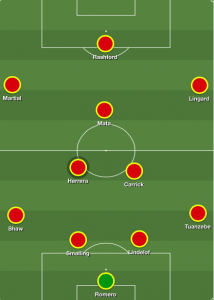 This season really is Shaw’s last chance to prove his worth as a United player. He enjoyed a promising start under Mourinho last season but ultimately dissolved into anonymity by October, and the left back slot has been a problem ever since.

The Englishman has all the attributes to make the left back slot his own: powerful going forward, positionally astute, disciplined, defensively sound. His capacity to maintain the required level of performance over a long stretch of time will be what defines his United career from now on, and he will be desperate to make a positive start against the Championship side.