Home » Photo: The reason why Jose Mourinho was sent off against Southampton

Photo: The reason why Jose Mourinho was sent off against Southampton

As Southampton prepared to take one last set piece before the final whistle, referee Craig Pawson stopped the game and ran over to the touchline, where he promptly asked Jose Mourinho to go to the stands.

Nobody, you sense, knew the reason for this apart from the fourth official and Pawson, but it then turned out that Mourinho had committed one of the worst sins of all: stepping a few inches over his dugout and on to the pitch.

He shook the hands of those on the Southampton bench before departing and didn’t witness the final passage of play that saw Manchester United hold on for a valuable 1-0 win.

Here is a photo of the aforementioned infringement. I’ll leave you to be the judge of whether this merits a one-game ban. 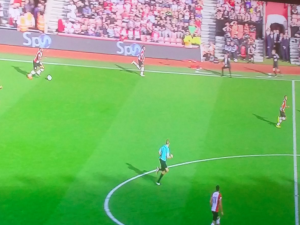 Stepping on to the pitch during play, even slightly, obviously constitutes the breach of a non-negotiable red line in the rulebook of the FA, which makes any appeal essentially pointless.

Nevertheless, I cannot held but feel as if this has happened before. Surely most managers have, at some point, got slightly over-excited and accidentally placed a foot on the pitch. How many of them have been punished?

This is the thing about Mourinho: his reputation precludes him from anything he does slipping through the net.