Manchester United’s improved potency in front of goal during the early stages of the campaign has largely masked the fact that Jose Mourinho‘s men have the best defensive record in the Premier League.

Only Jean-Eric Choupo-Moting, who claimed a brace during Stoke City’s 2-2 draw with Man United, has got the better of David de Gea so far this season, with Eric Bailly and Phil Jones claiming five clean sheets out of six.

With United runnning riot at the other end, the pair have been indomitable at the back, working in perfect symbiosis to produce combative, powerful displays.

And with that in mind, here is a potential XI for the trip to CSKA Moscow with the pair returning to suspension after serving their respective UEFA bans. 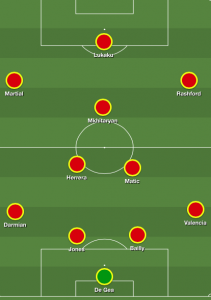 United will go absolutely nowhere in Europe if their back two don’t provide a suitable platform from which to dominate teams and hold the ball.

Needless to say, the pair, despite impressing domestically, will need to send out a statement to the rest of the continent on Wednesday night.