Jose Mourinho faces something of a selection headache ahead of Manchester United’s trip to Moscow with Marouane Fellaini, Paul Pogba, Michael Carrick, Phil Jones and Antonio Valencia all set to miss the clash.

Ander Herrera will be handed a reward for his impressive cameo against Southampton last weekend with a place in midfield alongside Nemanja Matic.

But with Valencia set to miss out and Luke Shaw still far from full sharpness, doubt surrounds who Mourinho will choose to feature as full-backs in the Russian capital.

Here is a potential XI for the clash with CSKA including Matteo Darmian and Ashley Young starting on the flanks. 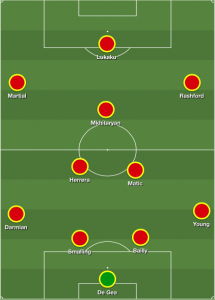 Young has provided Mourinho with an important alternative dynamic out wide ever since returning from injury against FC Basel earlier this month. He offers an energetic, disciplined style out wide, mixing impressive technical bravado with a wider intelligence of what surrounds him, alongside a wand of a right foot.

Indeed, it was his cross from the right hand side that got United off the mark in Europe this season and Mourinho may want to call on him again to provide the same kind of pin-point delivery.

Darmian, on the other hand, deserves a chance to assert himself at left-back – still a glaring issue for the 54-year-old – in Moscow after showing signs of promise in that role during the latter stages of the 2016/17 campaign.