David de Gea has been putting in the hard yards between the sticks ahead of Manchester United’s Champions League clash with CSKA Moscow at the VEB Arena on Wednesday night.

Much has been made of Man United’s superb start to the season from an attacking perspective, but De Gea deserves considerable credit for claiming six clean sheets from eight games so far.

He was barely forced into making a save against FC Basel but may face a trickier task against a physically imposing CSKA side and striker Vitinho, who already has three goals to his name this season.

And the Spaniard has been pictured working hard in goal ahead of the clash with Viktor Goncharenko’s side. 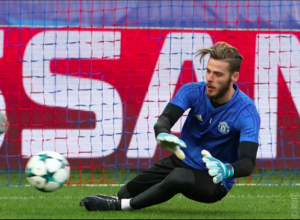 Games like these are why De Gea continues to play for United. Failure to reach the Champions League for two years in a row would have pushed the Spaniard towards the exit door and supporters can only be thankful that their club avoided such a gloomy prospect.

Now, however, is the time for De Gea to show his worth to the watching world. He has been virtually intractable on a domestic front this season, with Stoke City’s Jean-Eric Choupo-Moting still the only player to score past him, and Mourinho will need him to bring the same verve to United’s Champions League expedition if they want to make any notable impact on the competition.