Jose Mourinho and Jurgen Klopp will have plenty of time to study their opposite numbers over the international break in preparation for Manchester United’s visit to Anfield on October 14.

For Klopp, the current defensive frailty and indecision in front of goal pervading his side ought to be more of a concern than anything else.

Mourinho, on the other hand, only needs to look at Liverpool’s last two goals against Spartak Moscow and Newcastle to identify the their main threat: Philipe Coutinho.

With that in mind, here is a potential XI for the clash at Anfield with Ander Herrera and Nemanja Matic in midfield. 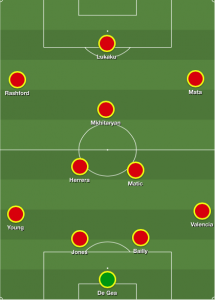 You can see why Coutinho wanted to join Barcelona, can’t you? He stands above any other Liverpool player in terms of composure and class to a considerable degree.

While others around him have fumbled good opportunities in recent times, Coutinho has been there to provide that crucial touch of brilliance to avoid complete embarrassment. He is their X factor. Their trump card.

Needless to say, this is where Herrera comes in. The Spaniard will be fresh after missing out on the Spain squad and Mourinho, in turn, could instruct the midfielder to a job on Coutinho similar to what he did to Eden Hazard back in April.

With Coutinho out of the game – or at least severely limited – Liverpool will have nowhere to go, paving the way for their attacking quartet to inflict damage.